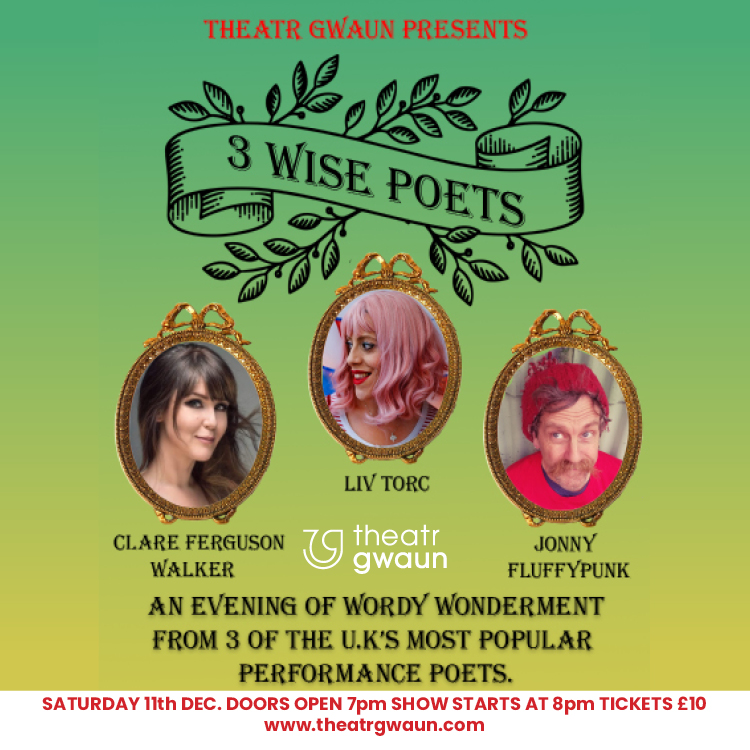 Doors open at 7pm for an 8pm ShowTime

Expect an evening of wordy wonderment, laughter, hope and above all human connection. This will be a chance to see 3 of the U.K’s most popular performance poets and an opportunity to meet and greet them all afterwards.

An economic refugee from the Home Counties, Jonny Fluffypunk is a stand-up poet, performer and lo-fi theatremakes who fuses bittersweet autobiography, disillusionment and wonder into work which has established him as a firm favourite at gigs, festivals, arts centres and housing benefit offices up and down the country.

Liv Torc is a poet, artist and ideas weaver who plunders the vast caverns and dormant volcanoes of the human and planetary condition. A Radio 4 Slam winner, a former Bard of Exeter, host of The Rainbow Fish Speakeasy and The Hip Yak Poetry Shack. Liv runs the poetry stage at WOMAD, the Hip Yak Poetry School and the lockdown haiku and photography project Haiflu – as featured on the BBC’s Radio 4 Today Programme.

She is currently co-artistic director for the COP26 Hot Poets project, where Art & Science work together to imagine better possible futures.

“A glorious trip around the West Coast along with a trip around this incredible woman’s mind, hilarious and deeply touching”  5 stars. Metro.

As a singer, Clare is currently working with legendary producer Craig Leon on their debut collaboration set to be released in the new year.

Clare’s sculptures have gained her international recognition, with shows in Japan, LA and San Francisco, her work appears in public and private collections all over the world and she was recently named in the Times as one of the U.K’s leading female sculptors.”